Berlin University of the Arts

Practice makes perfect. This is also true for the music students at the Berlin University of the Arts. But because the practice rooms in the main building were becoming scarce, an innovative idea was needed. And it came from TRU Architekten: Namely, to erect two pavilions in the previously unused backyards of the building. The pavilions are anything but a temporary solution. In their construction, architectural language and robustness, they were designed with the intention of offering students a permanent place for their art. 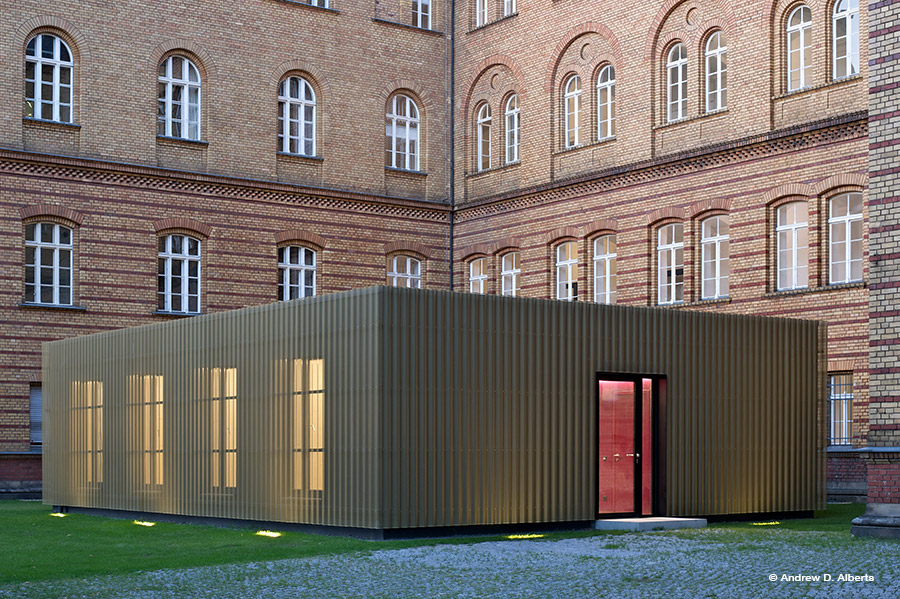 Framed by the side wings of the neoclassical building, a cube-shaped pavilion has now slid into each of the two inner courtyards since 2019. Each cube houses six small practice rooms and a larger one with a concert grand piano. In the middle, the floor plan is intersected by a straight corridor, which has a strong recognition value due to its colourfulness: One corridor is entirely in dark red, the other in dark purple. The glass doors on both sides of the corridor make it immediately obvious which pavilion one is heading for.

Each practice room was delivered by truck as a completely pre-assembled module made of light-coloured solid wood and placed next to each other on the reinforced concrete slab. The hallway also functions as an independent module. In keeping with the linear design language, Luxsystem light lines with opal covers were installed along the entire length of the corridor. The continuous light profile makes the corridor ceiling appear separated from the exercise rooms - a metaphor for the fact that the rooms are actually separated from the corridor in terms of sound. The special feature of the modular construction is that each module represents a completely independent sound body that is sound-decoupled from the other modules. In this way, it is possible to make music in the rooms without being disturbed by neighbours. 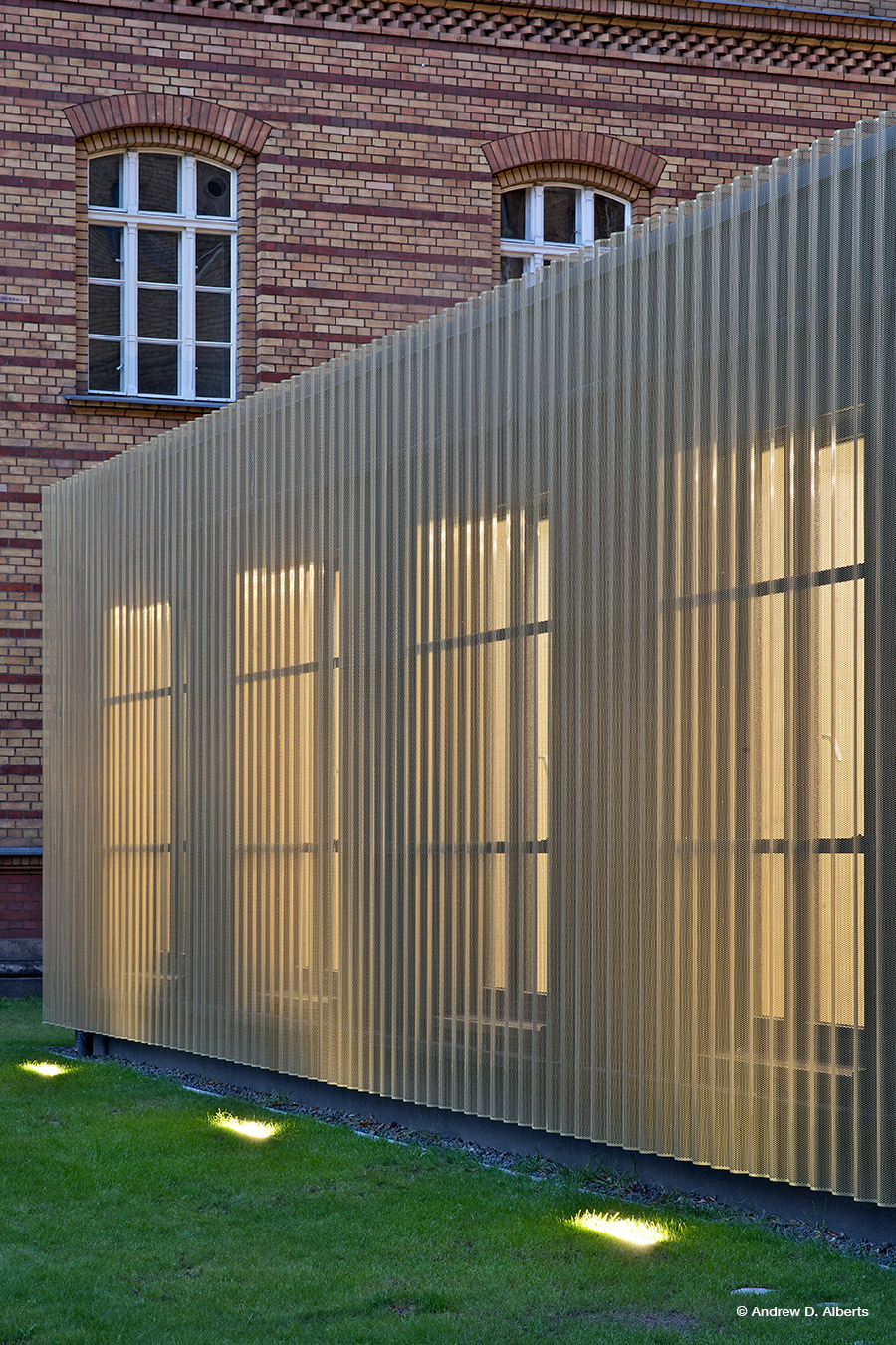 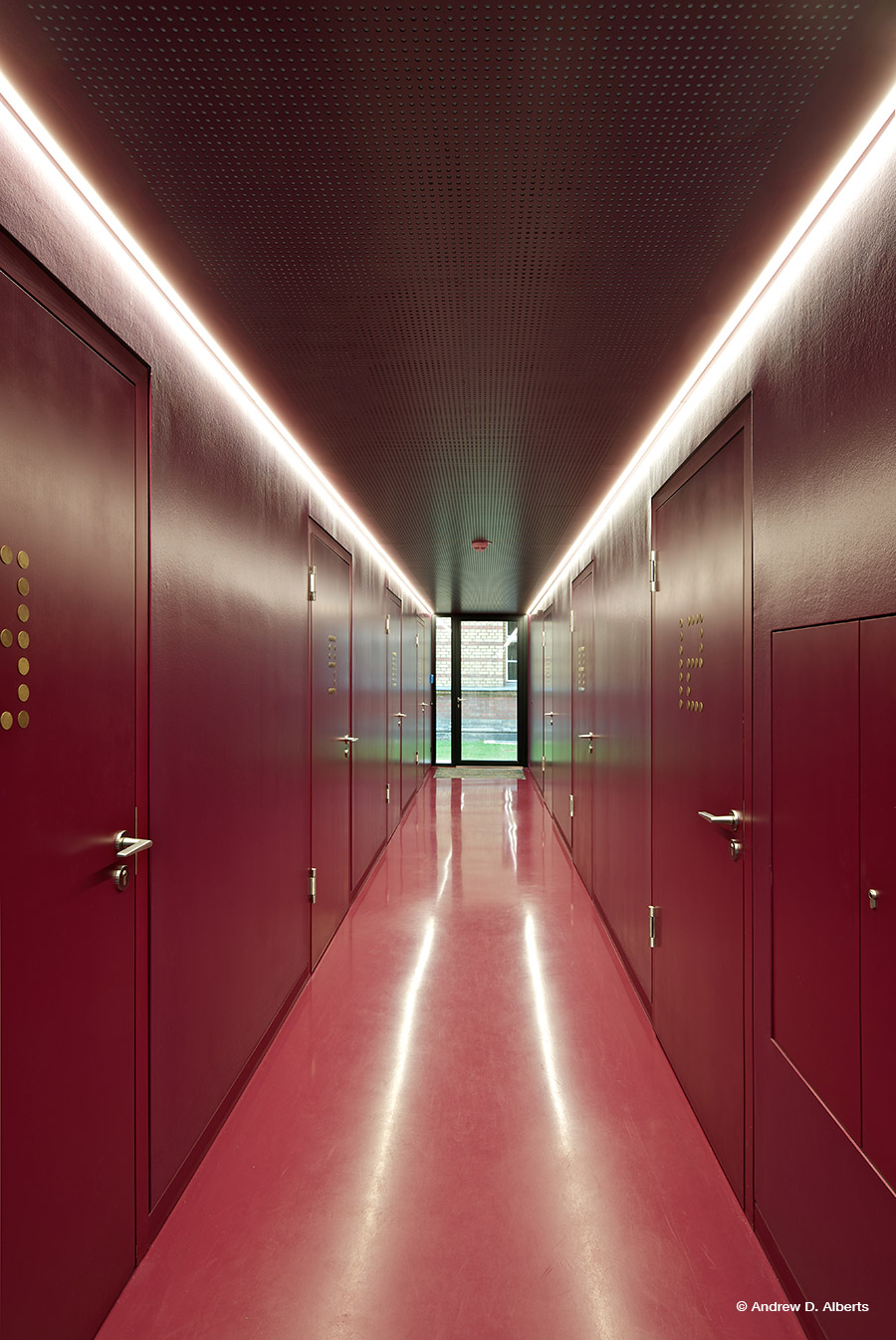 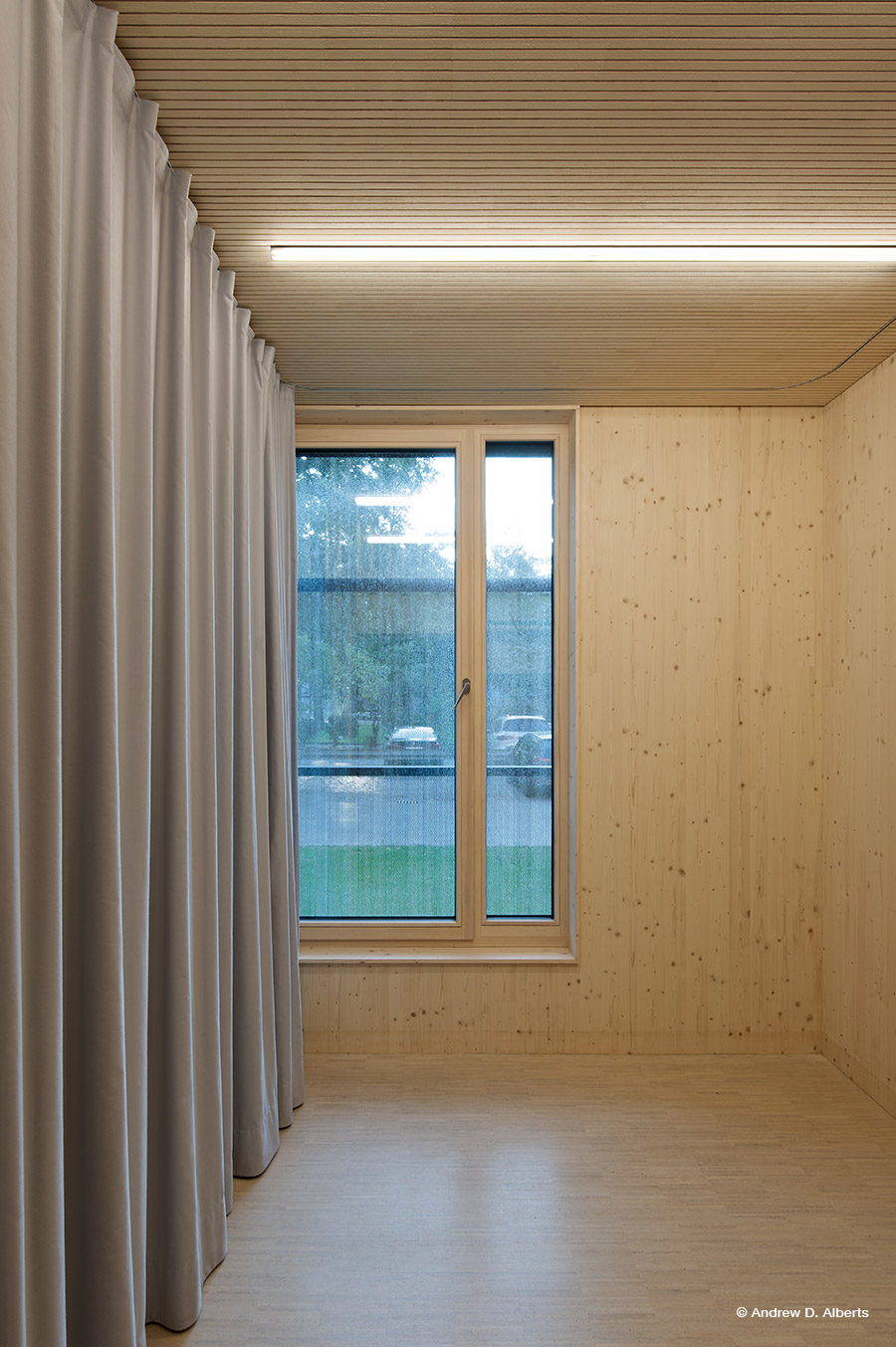 When the student opens the door to a practice room, golden light floods in: The surfaces of the practice rooms are made of light wood, which is evenly illuminated with 3000K warm light. Half of each of the 4 or 6 light lines are recessed into the wooden slatted ceiling, so that only the opal cover protrudes. The narrow LED light strips blend in perfectly with the width and rhythm of the narrow wooden slats.

The theme of sound waves was expressed in two ways in the pavilions: firstly, heavy, light grey curtains nestle around three sides of the inner walls of each practice room. They serve to regulate the reverberation of the sounds by being drawn open and closed. On the other hand, the undulating drape of the curtains is also echoed in the gently undulating metal façade, which is attached in front of the weather skin made of three-layer panels.

The golden, translucent metal façade harmonises with the warm colour of the neoclassical clinker brick structure. Through its perforations, the metal façade also reveals exciting views: when the artificial light is switched on, it allows shadowy glimpses of the students practising - when the light is switched off, the cube appears as a closed, uniform body. The successful façade design was awarded the German Façade Prize 2020.