Working light for being creative

An office that should be like no other. That was Covivio's goal for the design of their new headquarters in Berlin. The philosophy of the French real estate company is to redefine workspaces and combine them with cosiness. This requires harmonious interior design, and above all: well thought-out light. This is where Studio De Schutter came into play. In close cooperation with the interior design firm Antonius Schimmelbusch, a distinctive working environment has been created in Knesebeckstraße in Berlin - despite, or perhaps because, there were some architectural challenges to overcome. 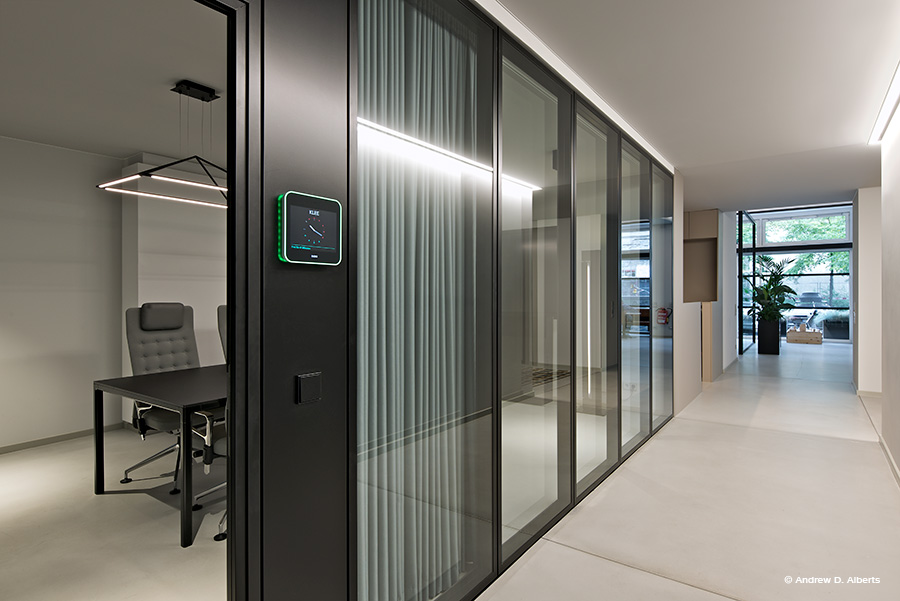 A place for exchange

Covivio Immobilien GmbH has its German headquarters in Frankfurt, but offices all over Germany - including Berlin. The employees often travel throughout Germany and also use other office locations to work. For this reason, the headquarters in Berlin, a core renovated property, was designed as a coworking space where work can be done flexibly.

There is additional workspace on the upper floors. The space on the ground floor, however, is the preferred meeting place for internal exchange, workshops, events and client meetings. For this reason, it was given special status in the design. 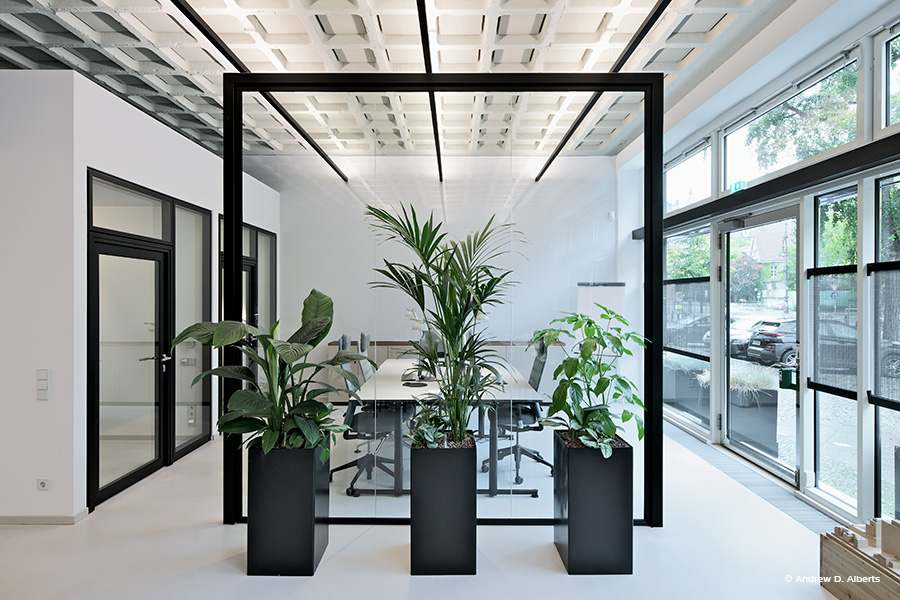 With awareness for good working light

The client was aware that a pleasant working atmosphere requires not only stylish furniture and high-quality surfaces, but also good light. Light that is not only decorative and not only technical, but that bridges the gap between concentrated work and creative relaxation. Decorative light was already planned by the interior designers. But ideas for functional light integrated into the architecture were still missing.

The existing architecture presented the planners with some challenges. For example, in addition to an existing concrete coffered ceiling, there was the need for many acoustic measures that hardly allowed any luminaires to be fixed. Creative expertise was required here. At this point, Studio De Schutter was brought into the team for support. 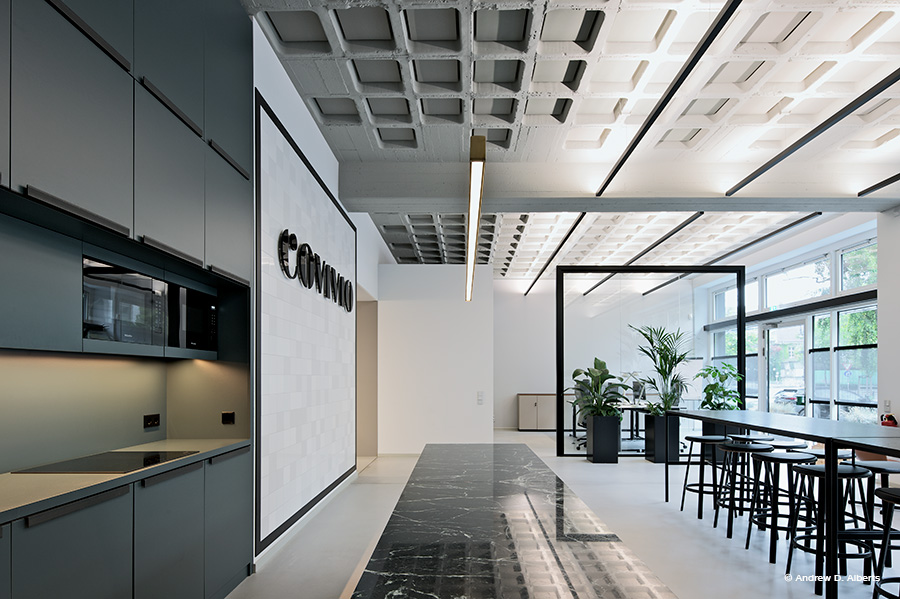 Acoustic fabric is stretched over the entire corridor area up to the small meeting room. This meant that every time a hole was drilled in the fabric, there was a risk of tearing metres of fabric. The lighting designers therefore decided to mount the frameless light lines in the corridor on the walls at the edge of the fabric panels rather than in the middle. The lighting now runs around the functional core and guides the visitor directly to reception.

The brass pendant luminaire above the reception counter was attached to the raw ceiling by means of a wooden substructure because of the tension fabric. This also resulted in a nice detail: the external driver could be hidden above the acoustic fabric, so that only filigree, current-carrying 12V cables pierce the fabric. Thus, everything technical remains hidden from view. 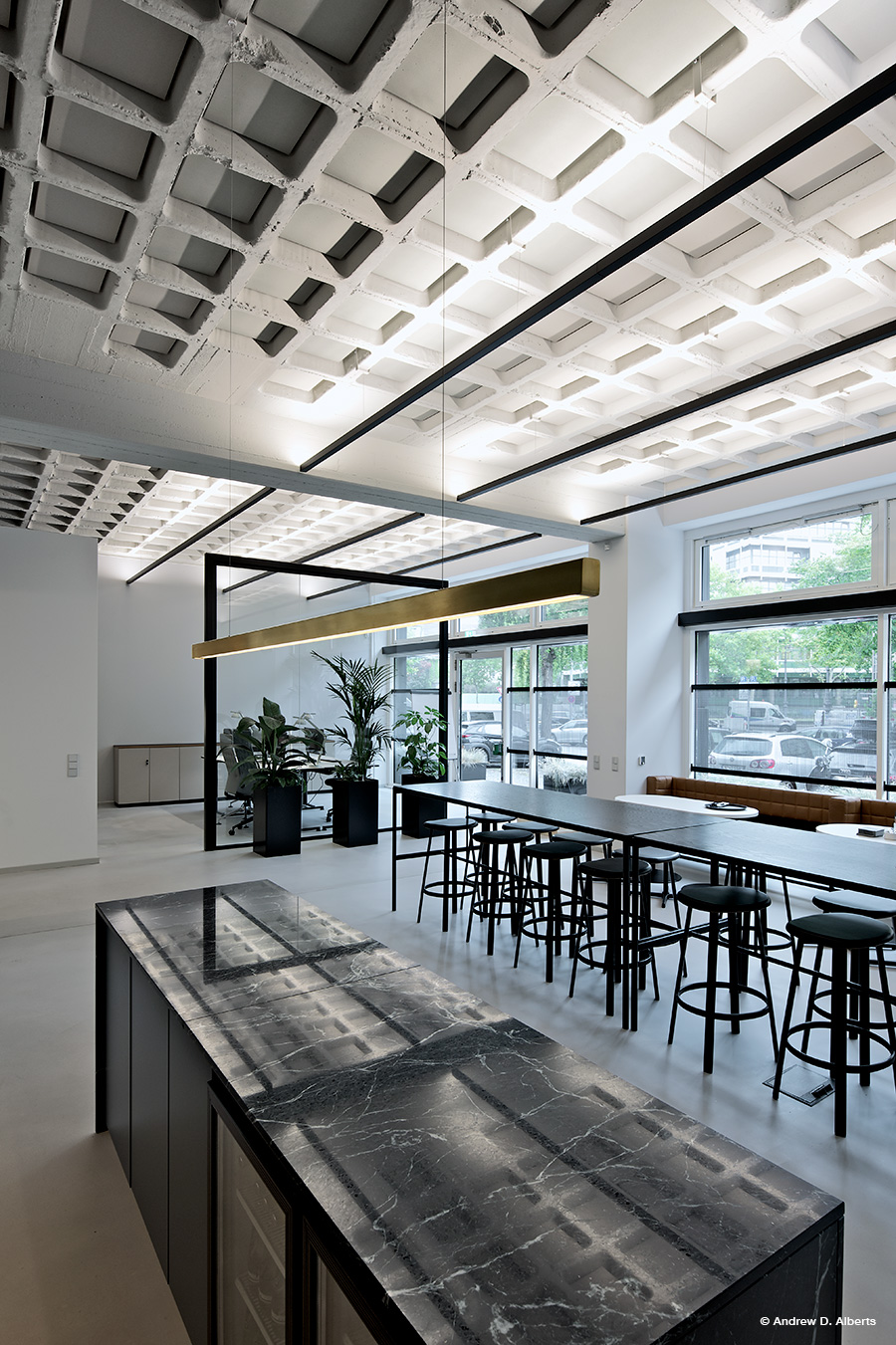 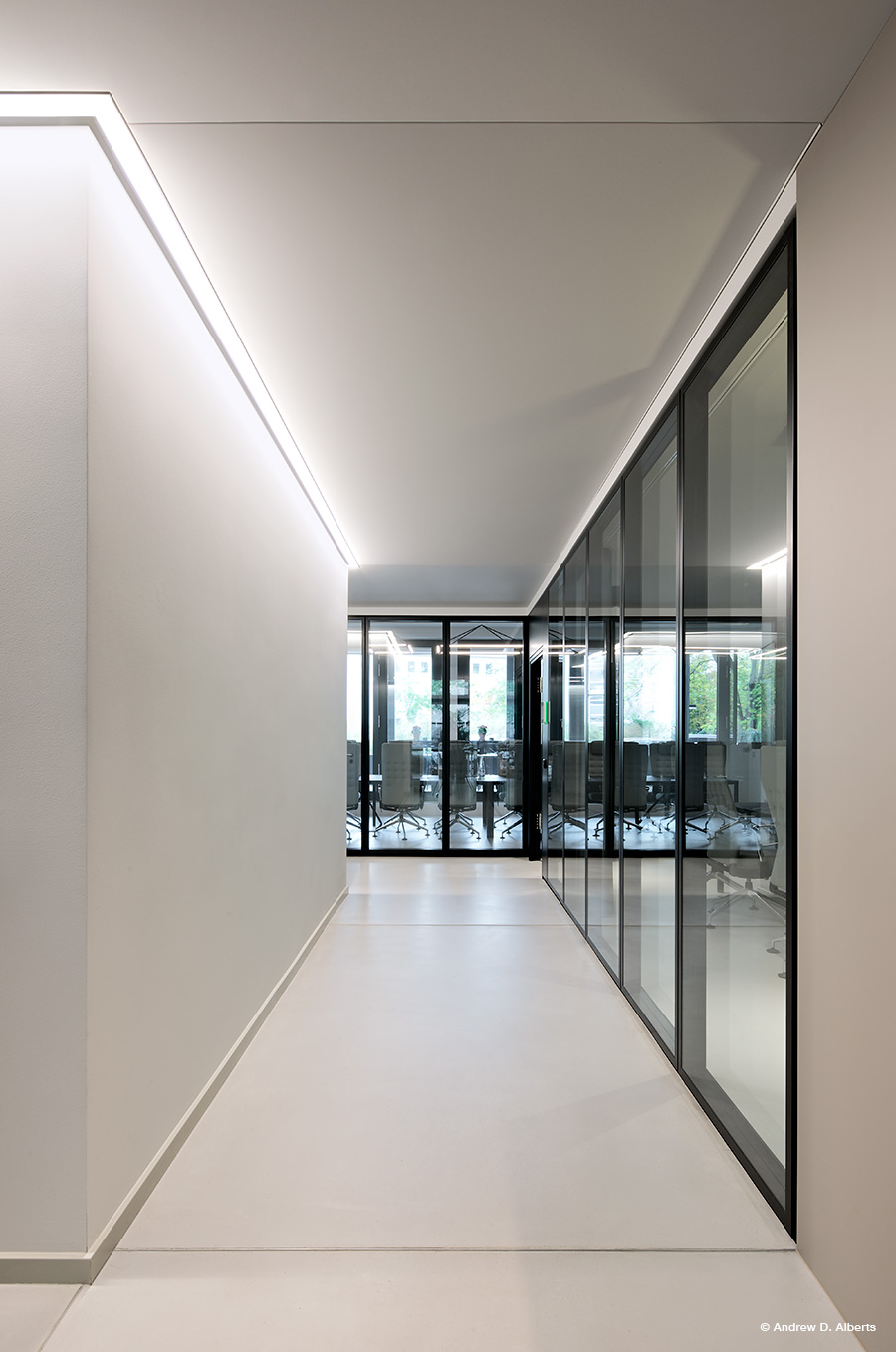 Challenge No. 2: The lounge with the concrete coffered ceiling

The lounge area was a special feature of the project. During the refurbishment, a large-scale concrete coffered ceiling was uncovered here. This was so thin-walled that acoustic panels had to be inserted into the cassettes in order to guarantee sound insulation suitable for work. For reasons of statics, only the sides of the cassette webs were suitable for fastening. For an even better sound climate, acoustic fabric was also stretched along the short sides of the room. And since the window frontage in this area also faces north, the artificial lighting concept had to compensate for the lack of daylight.

The lighting designers found an ingenious solution for these restrictive conditions: 6 m long U-profiles were suspended over the entire surface of the lounge, into which Luxsystem SL 20.2 luminaires were inserted, radiating upwards. The black profiles take up the interior designers' strong graphic design theme in their form, which was dictated by the glass wall with its industrial-looking black struts.

Special brackets were designed as ceiling fixings for the profiles, which fit around the webs of the concrete coffered ceiling like clamps and could be screwed in place laterally using injection dowels. Due to the powder coating in the colour of the concrete ceiling, the brackets visually merge with the architecture.

Studio De Schutter chose the Hadler luminaire for several reasons: The ballast was already integrated in the narrow LED light line, so no other place had to be found for it. The modular plug-in system also facilitated on-site installation. 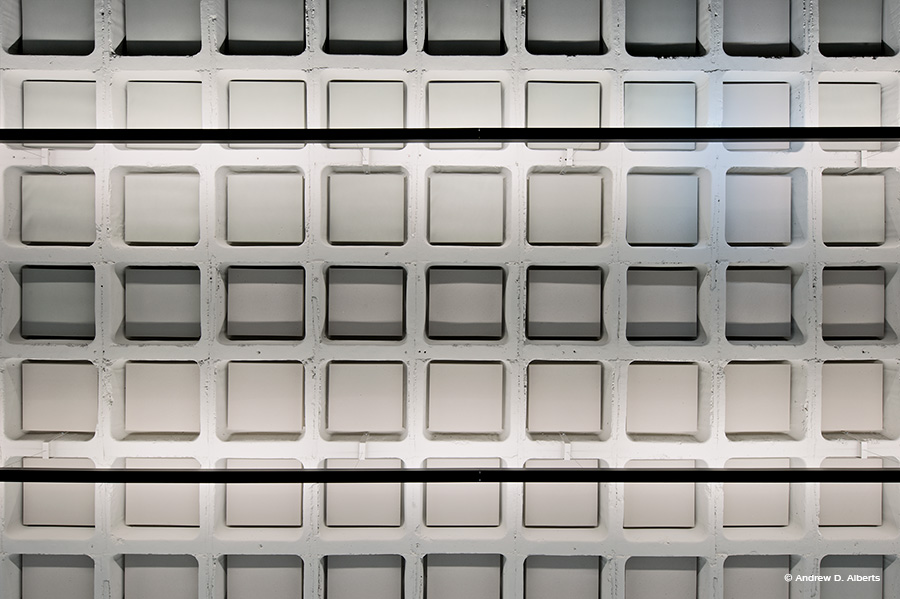 Creative working light - anything but boring

The LED light lines can be controlled in a light colour from 2500K to 5000K, depending on the time of day and the event. When needed, cool white light gives employees a good boost of productivity, and in the dark season, warm white light warms the soul.

By indirectly illuminating the concrete coffered ceiling, the lighting in the lounge acts as an extension of the missing daylight. Thus, unlike a normal office, the room appears much more natural and homely.

Improving the lighting of working environments is a central concern of Studio De Schutter. Creative light or light for relaxation is what they call the light that should not only be functional. "Offices are often too boring, too technically planned," Sabine De Schutter says. "There is often a lot of direct light, but little vertical or indirect lighting. But you don't always need direct light to focus, you also need light to think. The eyes also need to be able to digress once in a while."

The large conference room was also given dynamic lighting via a lighting cove. In combination with the statement pendant luminaires, the room is bathed in a soft light during video conferences, modelling the faces of everyone present equally well. For summer events, the room's glass doors can be opened to the terrace, so that indoor and outdoor space merge here as well.

So that everyone involved can see for themselves what the lighting mood will be like later, Studio De Schutter works with lighting samples in all its projects. The lighting effect of the Luxsystem luminaire in the U-profile was also made tangible in advance in this way. 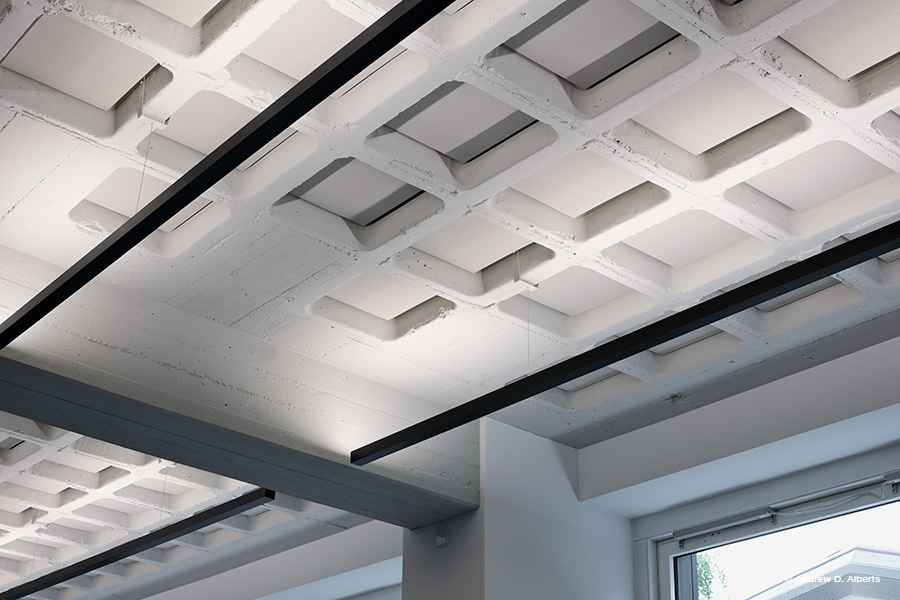 With love for detail

And that functional light can also be aesthetic is proven by the lighting designers' attention to detail. In Covivio's headquarters, for example, there are many more such project-related details that harmonise perfectly with the architectural language and the carefully selected surfaces. The interior designers already laid the foundation for successful lighting details with their concept. In the two telephone boxes by the lounge, for example, ventilation and light were simply combined so that the rest of the ceiling could remain untouched.

Ms. De Schutter is particularly pleased that the development of project-specific details in this project was supported by the client: "Our philosophy is that lighting and architecture should fit together as seamlessly as possible. We want to go into detail." And this can be seen and felt in the rooms of the Covivio headquarters. 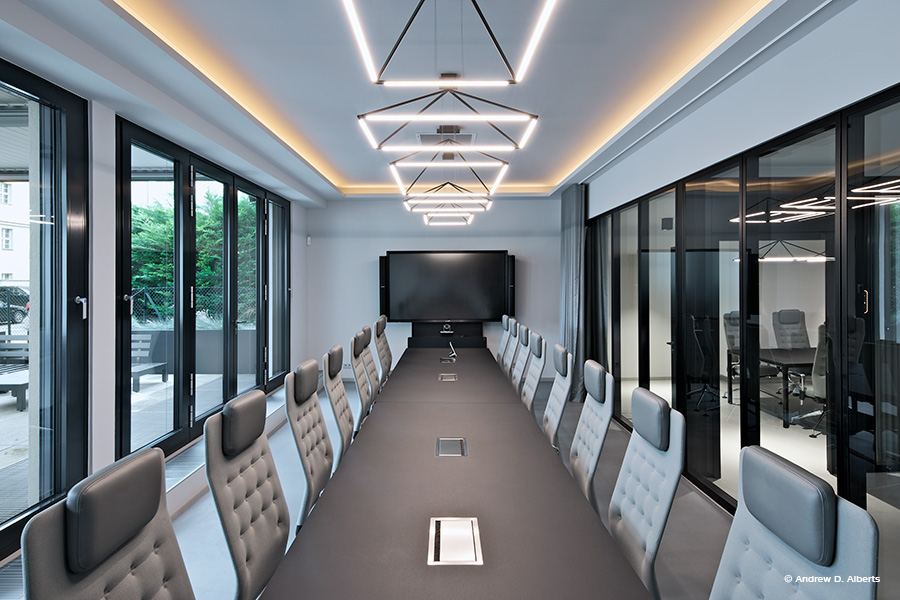